Is Ireland racist? The Waterford against Roma facebook page

The Roma community in Ireland have come under close scrutiny recently in Ireland. Thanks in no small part to Paul Connolly’s sensationalist brand of journalism. Gardai removed two blond children from their Roma parents because, as RTE reported, their “features, blond hair and blue eyes, contrasted with the other children in the family”. The removal was carried out without any proof of risk to their health or welfare. In fact, one of the children was removed because of a racist message sent to Paul Connolly’s Facebook page.

A Facebook page called – Waterford Against Roma, was set up today with the sole aim of harassing members of the Roma community in Waterford and posting pictures of them to Facebook.

Usually with a tagline of alleged crimes. 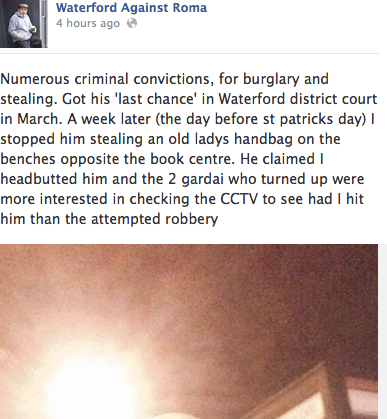 What’s really worrying – in the space of just eight hours the page has garnered over two thousand ‘likes’ with people adding vitriolic comments to the pictures posted. 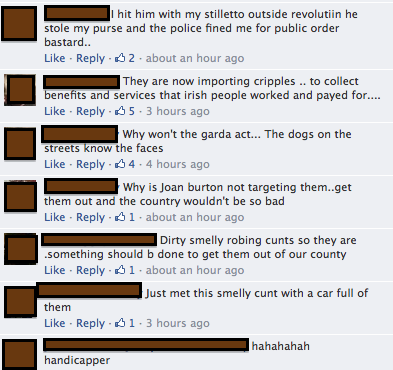 A recent report  by ENAR Ireland (The Irish Network Against Racism) says that two-thirds of victims who reported to iReport.ie won’t report an incident to Gardaí due to a lack of confidence in Garda ability to investigate. IReport is a reporting system for the people, communities and Irish organisations to document incidents of a racist nature that are occurring nationwide. Not only is the above Facebook age racist but also an incitement to hatred.

There has only been one attempt to charge someone for online incitement to hatred (I think). A kerry man was charged and acquitted of inciting hatred. He set up a Facebook page called “Promote the use of knacker babies as shark bait”.

Judge James O’Connor noted that while the comments made on Facebook were “obnoxious and revolting” it appeared that the remarks were a once-off and the man responsible had issued an apology.

Is Ireland racist? The comments on The Waterford against Roma Facebook page would seem to suggest racism is not only a problem…….. but on the increase.